Don't miss out on decluttering motivation.
Sign up here to get blog updates delivered to your inbox.

Try this if you need to get rid of items quickly

Jill Annis | Simply Organized | March 14, 2020 | Comments Off on Try this if you need to get rid of items quickly 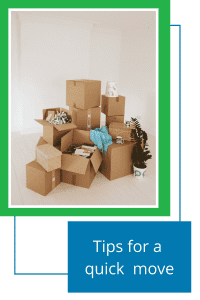 Sometimes a move to a different home is planned, other times it’s due to a crisis. My parents experienced both situations and moved 3 times in the last 9 years.

Each move required downsizing because of space constraints.

Fortunately, they’d downsized for decades and didn’t hang onto things that no longer served them. They continued with the downsizing mindset, even after their first move to a smaller place.

Pro Tip: Once you enter your 5th decade of life, start downsizing in earnest.

They moved out of their home of 50+ years in central Wisconsin to a Madison senior apartment complex. Even though they had months to pack they were brilliant and leveled-up their donating, tossing, recycling, and selling efforts. An exhausting process for an 83-year-old couple, as it would be for anyone.

My mom wanted one more garage sale before they moved since it was a life-long summer tradition she enjoyed (I don’t understand the enjoyment part). Very little sold but my mom’s excitement made it worthwhile. We ended up donating a garage full of leftover stuff.

Pro tip: skip the garage sale and donate as much as possible UNLESS you are juiced about having one AND have extra energy and time.

My folks lived in their Madison apartment for 9 years. During that time, my mom passed away, which resulted in an emotional letting go process for us all but we could take our time.

Then my dad had a health crisis in November 2019 and needed to quickly move to the assisted living building in his complex.

We emptied his apartment in 5 days because we had a deadline and were determined.

While grieving this sudden loss we worked quickly to donate most of his belongings within 2 days, by January 1st so we scheduled a pick up with St. Vincent De Paul.

Dad’s futon needed a new home and we knew St. Vincent wouldn’t take his futon — there are items they won’t accept.

So how does one QUICKLY off-load a clunky, heavy futon?

The Marketplace is a separate group on Facebook for the sole purpose of selling, buying and giving things away. There are groups in most cities. Search for your city and join the group if you’re interested. *Be careful, it’s addicting and you may end up buying instead of selling.

My awesome niece, Heather, offered to help me out by listing the futon for FREE (we needed it gone) on FB Marketplace. I’ve only used Craig’s List in the past to list things for free.

She listed the futon and within an HOUR a wonderful gentleman took it plus a large t.v. we offered him. *Most charities won’t take tv’s.  We tried, but couldn’t convince him to take more stuff.

Because the futon disappeared quickly Heather offered to list more furniture. I sent her a photo of the kitchen table and we immediately had a taker. Then we called it a day, a long and emotional day.

St. Vincent’s would take it all the next day so why list it, right?

Incorrect. When St. Vincent arrived they wouldn’t take the desk or recliner. 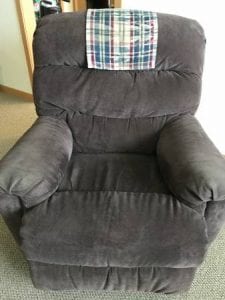 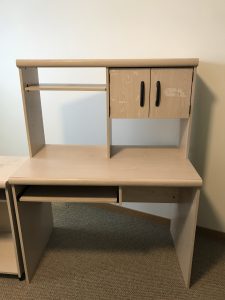 I didn’t want to toss furniture in the landfill so I turned to FB Marketplace myself and listed them after having zero success giving them away on Craig’s list, my usual go-to service.

Lots of responses instantly came through on FB.  It  became so confusing that I promised the desk to 2 people at the same time. Super awkward but thankfully only one person showed up.

A lesson I learned: List ONE item at a time or take good notes about who you promise the item to.

Our last item, the recliner, was picked up an hour later.

What a relief to have it all gone.

Another lesson I learned: you can suggest they bring a truck to haul large items, i.e. a recliner,  but that doesn’t mean they’ll take your suggestion.  Our person drove a small car, placed the recliner on the top of its trunk, secured it with a thin rope and drove 30 miles home. True story!

It felt good to spread joy and give things a new life. The woman who took the recliner told us she couldn’t wait to sit in it while knitting.

All in all, FB Marketplace served us well, especially when we were in a bind and stuck with items St. Vincent’s wouldn’t take.

When you give things away…..

* You don’t have to throw out useful items even when you’re in a rush.

* You won’t have to haul heavy items out of your house.

* But be safe, don’t allow people in your home if you live alone.

Have you used FB Marketplace? I’d love to hear about your experience, good or bad, in the comments below.

Get your FREE road map for downsizing guidance and support.

Posted in and tagged

Ready to find out more? Get started today!

Call 608-575-7467 or email jill@simplyorganizedwithjill.com for a personalized quote. 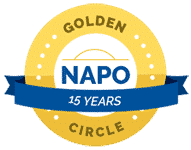 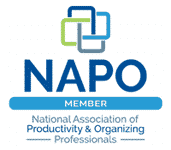 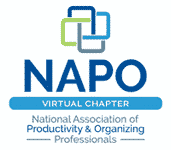